My ISP is Cheating on Speed Tests, Too!

In this very inspiring blog post, Kirsle accuses Time Warner Cable in Los Angeles, CA of traffic-shaping speed tests in order to make it appear that they are delivering internet speeds as advertised (when in fact, they aren’t). My post aims to be a spin-off experiment.

The apartment complex I live in has an exclusivity contract with AT&T. It is worth noting that in 2007, the FCC adopted an order that prohibits exclusive service contracts in multiple dwelling units. This order was challenged and upheld in the Court of Appeals for the DC circuit.

Naturally, I’m stuck with AT&T U-verse, which is a fiber-to-the-home internet service. I pay $50 per month for the “Max Turbo” internet package, which is advertised as “Downstream speeds up to 24 Mbps”. Before telling you just how much it sucks, lets look at some simple tests. 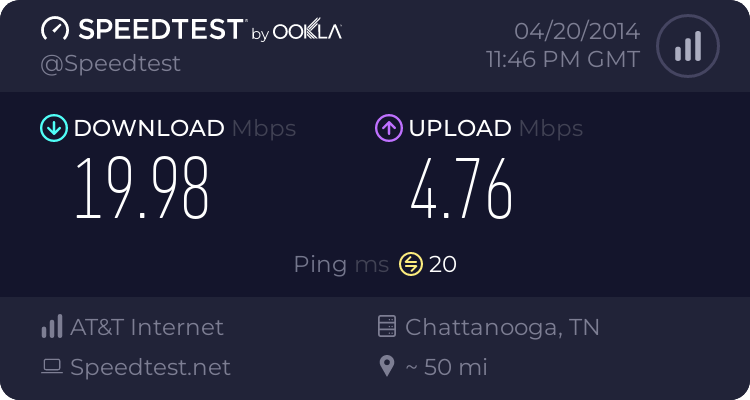 20 megabits? Not terrible. It’s close enough to 24 megabits to not be upset. I want to automate this process, so let’s try out this speedtest command line tool written in python: 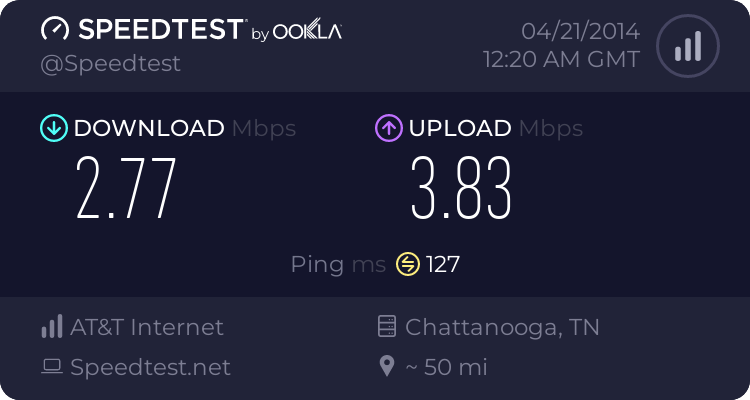 Hmm… That’s interesting. When I don’t load the full speedtest.net webpage / flash speedtest tool, I seem to get speeds that are a lot slower. In fact, the flash interface appears to be 7 times faster. Perhaps the command-line tool can’t handle the speed? Let’s try a command-line test from work. 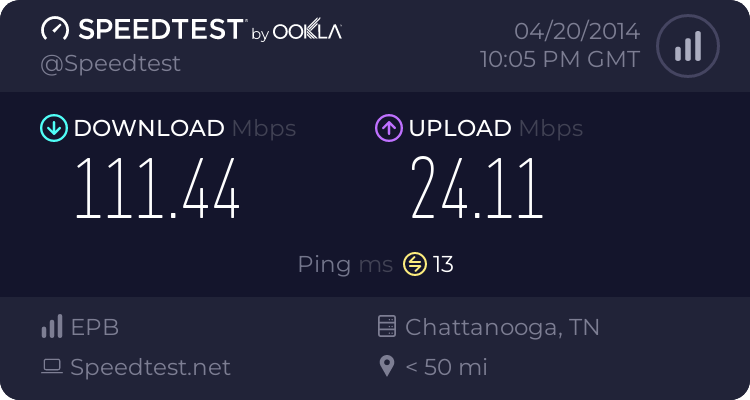 Skip the rant, I want to see the experiment

Apart from the deceitful labeling of speed packages, here are some problems I have with AT&T’s U-verse service.

The inability to use my own hardware

The overlords at AT&T have decided to provision me a 2WIRE HomePortal 3801HGV “Residential Gateway”, which is the biggest piece of trash, ever. It is the combination modem/router that resides between my home computing devices and the copper wiring that comes out of the ONT, and its sole purpose is to create chaos and disarray. My almost-ten-year-old Linksys WRT54GL is a more reliable computer.

Here’s a snippet from the product propaganda: 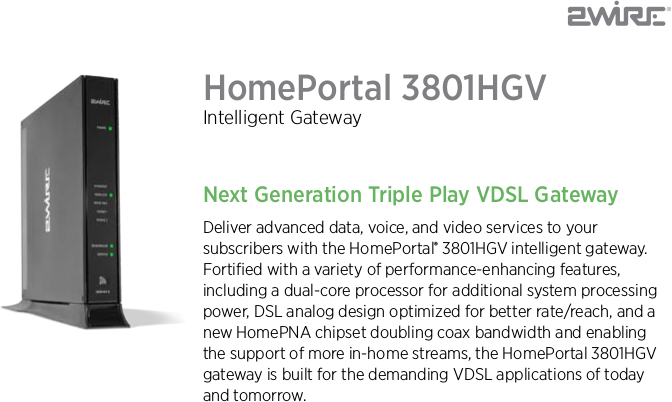 That thing has a dual-core processor in it? Could have fooled me. From my perspective, it might as well be a kerosene-powered cheese grater. Hardware quality and performance aside, the lack of alternatives means I am required to pay an additional “Equipment Fee” of $7 per month.

During the initial setup of my cable and internet service, the tech was hesitant about connecting the set-top box to my receiver over HDMI, claiming, “HDMI wasn’t designed to handle BOTH audio and video at the same time. If you plug it in this way, your TV will be really slow.”

…HDMI wasn’t designed for both audio and video? I have no words to describe the amount of misinformation presented in those two sentences.

At one point, during a particularly bad outage, the tech they sent out tried to blame all the problems on my router (in hopes that they could charge me a $99 fee, I’m sure). The tech asked me, “Have you ever heard of backfeeding voltage?” I replied simply by saying, “I most certainly have not.”

It is extremely frustrating when I have to replace the aforementioned modem/router every couple of months. In my experience, this particular piece of hardware likes to die on Saturdays, which means it doesn’t get fixed until Monday, resulting in a weekend of sadness and outside activities.

It’s a good thing I have unlimited data and tethering on my mobile plan.

Any attempts to do Xbox 360-related things result in my entire internet connection being dropped for a few minutes. I’m sorry Microsoft, but AT&T hates you and wants to ensure that I can’t enjoy your premium Xbox Live service anymore. I think I’ll just cancel my subscription because it’s essentially worthless.

Dont believe me? Here are some results from today alone: 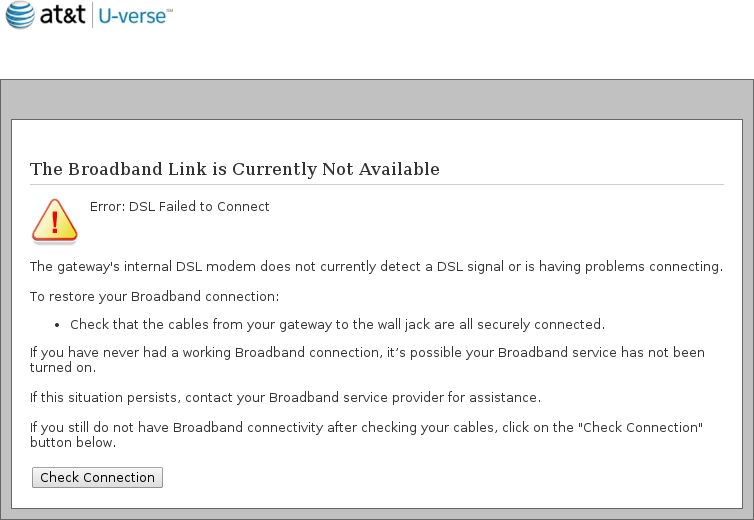 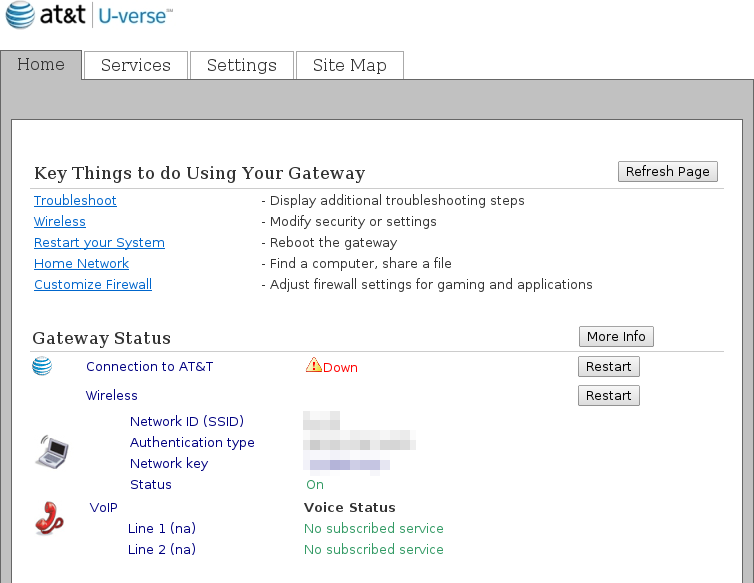 At one point, I attempted to download Halo 3. That was a mistake. The download failed repeatedly, and I had to babysit the controller, pressing “A” to retry many many times. For reference, Halo 3 for the Xbox 360 is a 5.72 GB download. 5.72 GB at 24 Mbit/s should take roughly 31 minutes, not 12 hours.

24 Mbit/s?!? Yeah right. A 22 minute episode of Parks and Recreation should not have to be an hour-long extravaganza of “have you tried turning it off and on again?”

Finally, the moment you’ve all been waiting for. I didn’t repeat Kirsle’s experiment exactly. I collected data over the course of the entire month of March 2014.

A tiny bit of jitter here and there, but nothing particularly upsetting. No complaints about the ping overall.

This is a common overarching issue with a number of products and services in the US. That issue is how companies are free to screw people over, and the individual’s only opportunity for recourse is to say, “Hey! You’re a big meanie-face! Quit it!” When companies are allowed to lie to and take advantage of consumers, it’s not just damaging to that individual consumer, it is harmful to capitalism as a whole.

As for the apartment complex exclusivity deal, why should they get to step outside the bounds? The consumer doesn’t get to. There is very little consumer protection in this area as well. They have eliminated competition and created thousands of small, captive populations where they hold a monopoly on the digital entertainment service.

Do you consider yourself to be against government meddling? Do you think that businesses should be free to operate the way they want to in a free economy without government regulation? If so, this should piss you right off. When you get ticked off at government regulating business, you can look no further than the business itself.

Can AT&T do something about this? You’re damn right they could. Are they going to? No. It might work if they showed even the slightest hint of good faith, but they don’t. They are still making money, so why should they care? They brush off all faults and say, “We can’t be held responsible for these issues you’re describing”. Maybe they think they’re really clever and play the circlejerk game:

You know, Microsoft’s Xbox Live service might be slow.

AT&T treats you, me, and the rest of their customers like garbage. Don't use their services. Don't give them money. Ever.

Vent your own frustration about AT&T at hateatt.com.

Tom enjoys playing PC games and tinkering with electronics. He loves learning about all things related to technology. His favorite GNU/Linux distribution is Arch Linux.

Enjoy this blog or find it useful? Please consider supporting it.

Get notified of new content by subscribing to the official Atom feed.